After yesterday's mediocre run, I have an entirely new strategy for today: pick easy routes and execute them cleanly. So simple! David and I head over to Shawnee Mission Park for Day 2 of the IS/IC Championships hosted by PTOC and OK. My start time is about the same as yesterday, but since Daylight Savings Time ended this morning, my body thinks it's an hour earlier. That, combined with some heavy fog, makes for a very sleepy morning. I try to wake myself up before my start by including some pick-ups in my warm-up jog. They seem to work as I try to enter the start tent a full 3 minutes before my assigned time - the meet officials politely kick me out until 10:08am. While waiting, I think I kind of need to pee, but since it's only a few minutes I decide to just hold it and go race. Shortly, it's my turn to start, and I get to say hi to Peggy (former national champ who beat me yesterday) who is volunteering in the start tent. Also there is Susy from the Golden Girls!! I have to remind myself to stop chatting and get into race mindset. And then, in a few short seconds, it's time to start! 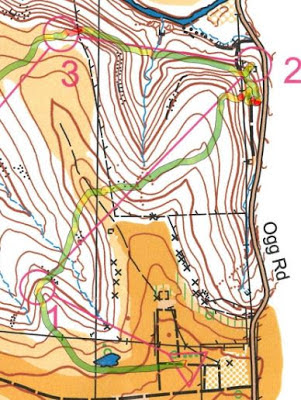 The run to CP1 is a little wide around the pond but I just focus on executing down the spur, and pretty soon I have the first control out of the way cleanly, already a huge improvement from yesterday. Redline looks as good as any route to CP2 so that's what I pick, and as I'm descending the attack spur I feel the need to pee. Crap! I should have taken care of this at the start when I wasn't on the clock. And I'm not sure if this happens to anyone else, but suddenly I can't focus on anything else besides peeing. I can't think about the map, I can't think about controls, I can only think about peeing RIGHT. NOW. So, I do that (runners, this is the equivalent of stopping in a 10k...entirely unnecessary!) and in my haste I lose contact with the map. It takes another minute or two to relocate (you can see the red dots on the QuickRoute image) but finally I get my bearings and punch CP2. I am back in the game and pick a straightforward route to CP3. Boom. It's clean, and I'm back on track. 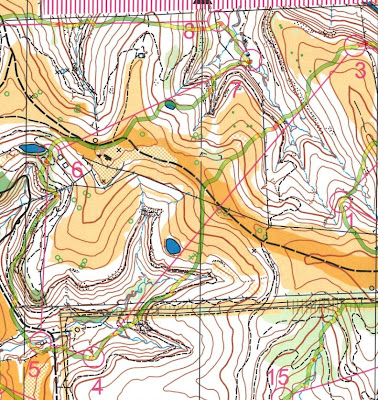 From CP3, it's a long leg to CP4, but there's nothing especially heinous about a redline route so I just pick that and run it. I try to make good use of the fields in the middle and then pay careful attention once I hit the reentrant system towards the end. Everything checks out and the control is right where I expect it to be. Awesome! CP5 is super short so I hop over a few meters and punch it cleanly as well. There are a few route options to CP6, and at first I decide to take the all-road route. But, a few more glances at the map while I'm running low shows the trails that lead almost straight to it, so I climb a few contours to get on them and run as efficiently as I can up the gradual climb. There is some veg to fight at the top but nothing horrible. The route to CP7 looks straightforward as well so, with David's words from yesterday still echoing in my head, I run straight at it. The rocky terrain makes me slow down a little as I descend into the creek but as I come around the spur the control is happily staring me straight in the face. Great! I punch and as I leave the circle, I hear footsteps behind me and somehow they sound familiar...yep, they belong to David who has caught me after starting 6 minutes later. He punches CP8 a few seconds ahead and I now have a great rabbit to chase on the climby route to CP9. 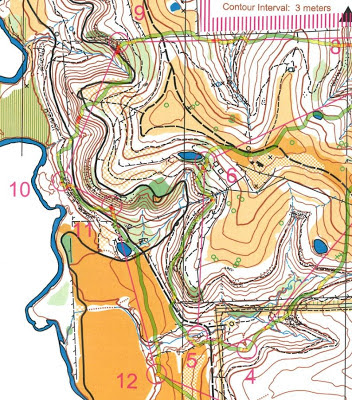 I work really hard to keep David in my sights. The nav on this leg is not difficult, but the climb is, so it's good to have a psudo-partner in suffering. I'm able to almost match pace on the uphills, but I'm concerned with staying in my own map so I take extra glances on the downhills while David zooms farther ahead. By the time I punch CP9 he's completely out of sight. My route to CP10 is pretty clean, but the downhill is rocky and loose so it's way slower than I anticipated. I execute CP11 pretty well too, again taking a simple route that uses a fair bit of road. As I pop into the field on the way to CP12, I spot David's green shirt on the far side, which gives me a little bit more motivation to run fast across the open and flat terrain, crossing the stream and then popping down into the ditch to punch the control.

There is some more field running after CP12, and it's all slightly uphill which makes it arduous. But pretty soon I'm back in the woods and I use a trail to take me up the reentrant, then bounce 2 streams over to get to my attackpoint for CP13. There are a few controls in this area on similar features but for once I am confident in my map reading so I can ignore the flags that aren't mine. CP13 is great and then I keep track of the trail crossings on the way to CP14, also clean. On the way to CP15 there is another bogus control but since it's almost directly on my route I stop to check the code, confirming it's not mine. After punching CP15, I have a moment of dread as I see we are being taken back into the Bermuda Triangle area of dark green and boulders...lots of potential for nav screwups here! So I take a nice safe route up to the powerline and run really hard, crossing the road and the first stream, I attack CP16 off the powercut slightly early and get confused a little searching for it. But I know well enough to stay calm and work hard at relocating, which I do in about 10 meters. Then the marsh and subsequent control flag comes into view and I breathe a huge sigh of relief - time to get out of here! I take another safe (and extremely thorny) route back to the powercut and then mostly trails to CP17. On the way out of CP17, I see my buddy Justin approaching who is running the Blue course. We exchange friendly "ka-kaws" before I hustle away - he could catch me on the way to the finish and I don't want that to happen! So I take off across the field and in my excitement I trip and fall on a grass tuft. Uff-da. But there's no time to waste so I scramble back up and run hard to the go control, CP18. From there I can see the finish and I focus on running hard, trying to win the split bet I have going with David.
And I'm done! I see a few friends at the finish and squawk happily about my relatively-mistake-free run. As I reflect on it, I realize it's probably the best orienteering course I've ever done...I ran fast when I could, but mostly I just focused on the map and choosing routes I knew I could execute safely. I get my splits from the race HQ and it turns out I lost the go control bet to David by 5 seconds, so he gets the last remaining beer in the cooler. Even though the weather is chilly, I have enough warm clothes to hang out comfortably while waiting for final results to come in. I get to chat about route choice with Benjamin, one of the kids in SLOC who absolutely CRUSHED his Orange courses this weekend.

When awards are announced, there is about the least fanfare possible made over adult results...we're expected to self-report our placings and come up to grab a sample bottle of BBQ sauce. I guess this meet really is about the kids since they are the only ones who get medals! But I'm happy that our kids (Benjamin and Olivia) did so well and I got to see so many of my friends. And I'm proud to have overcome a big hurdle in my navigation technique...forgetting about trying to be "clever" and instead eliminating mistakes. Now I can't wait for the next meet to try this again! Pin It
Posted by Emily K at 3:02 PM