OK, yes, I'm working on a race report from the Castlewood 8hr but I want to get you caught up with my Thanksgiving. It was memorable from both a family and friends perspective!

GOBBLE GALLOP 5k
I flew into DLH on Wednesday night and on Thursday morning, my family was planning to participate in the Gobble Gallop 5k (me) and Gobble Gait 2mi walk (Mom, Dad, and Beve). Since the start/finish line was only a few miles from my house, I decided to jog there. It was an easy run and the weather was fantastic - warm enough for capri tights and a t-shirt with arm warmers. Duluth doesn't always get this lucky in November and I was happy to experience it.
I had no idea what to expect in the 5k race. I've had a long-standing goal of a sub-20min 5k since 2010 Big River Summer Speedwork. I went through 12 weeks of focused track work in an effort to produce a smokin-fast 5k. I worked hard in all of the sessions, but still fell slightly short of my goal, running a 20:08 on a hot August night. Now, I was in the middle of 30runs30days, but all of my efforts had been at MAF or below, hardly the ideal prep for a PR 5k. But, I knew the weather was perfect, the course was a fairly flat out-n-back, so I lined up about 10 rows back of the start line, near a couple of guys who were also gunning for 19:XX.
The gun went off and I ran the first mile off of feel (I had set my watch to show only time, no HR data). I locked into an effort that was uncomfortable but not crazed. I glanced at my watch as I passed the first mile...6:20-ish. Good. Perfect. Stay strong. Mile 2 contained the 180* turn, so on the approach I was able to count women and figured I was in 13th or 14th. The turn was smooth and soon I was hauling back to the finish line. There were numerous runners in turkey costumes in the field behind me, but my favorite runner was one dressed as a chef - clearly providing inspiration to the poultry. Mile 2 went by in 13:00-ish. Again, good, but I really need to hold strong to achieve my goal. I sensed another girl runner on my hip and I refused to let her pass - I told myself all of the AR and trail running this year had made me strong, and this is where strength would shine. I was hurting, but focused on form and thinking strong thoughts, which were buoyed by cheers from my family on their walk. GO EM!! When the finish line clock finally came into sight, I could still see the 19:XX and realized I was going to do it. I ran strong through the finish line in a flurry of women, I think 2 or 3 of us together, and stopped my watch...19:53!!! Yes!!! Elation!!! I walked/jogged back on the course to find my family and celebrated with them as they finished. I hung around for awards (I won a pie!) and then jogged back to my house to get ready for Thanksgiving dinner.

TURKEY BURNER
I was equally excited to visit Minnesota for Thanksgiving because my buddies at the Gnome Hunters AR team/MNOC have a Friday tradition: The Turkey Burner. It's a social run/bike event intended to bring people together outside of stores and malls for a fun longish workout. I was offered a really nice 26" full suspension mtb to borrow from my friend Peter, all I had to do was bring pedals, a helmet, and running shoes! Score! So my Mom and I hit the road EARLY Friday morning for the drive down to the Cities. Oh, I should mention, it had started snowing on Thanksgiving night so the roads were in not-so-good shape. We were driving 40mph on the interstate. Eeek! I was really nervous that we wouldn't make it in time, but things cleared up by about Hinckley, so we were able to make the start at House of Coates just before 9am. Relief!
Peter was already there and asked for my pedals so he could put them on the bike while I got layered up. How nice! Except...I dug around in my bag, and then my other bag, and then my Mom's car...no pedals. I called my brother, he checked my bedroom in Duluth, yep they were sitting in my backpack still. CRAAAAAAAP. We asked everyone else who was there, but no one had an extra set of SPD pedals, or flats. Multiple plans were made but in the end my Mom drove me (with Peter's bike) to a nearby WalMart, I bought a pair of $8 plastic platforms, and we met the group just before they started the run. Not perfect, but I still had plenty of running/biking/socializing time ahead of me.
The run was super fun, about 30 minutes of easy jogging where I got to catch up with the WEDALIans about fall races and meet some new MNOC people wondering what this AR thing was all about. The run was capped off with some history lessons, a group photo, and eating Biz's niece's peanut-butter-banana bread.
Then it was onto the bikes! I knew it was going to be cold, and it's always tricky this early in the season to get clothing right. I got pretty close, with 2 base layers and a shell jacket, 3 layers tights plus tri shorts, toe covers over my running shoes, 2 pairs socks, 2 pairs gloves, and a buff. The multiple thin layers helped keep an insulating air pocket around my body and nothing really ever got dangerously cold. My fingers hurt for a while, but a few minutes of well-timed sunshine helped that.

Our route was fairly straightforward back to the cars (at House of Coates), but its point-to-point nature had us going into the 20-25mph wind the entire time. Oh, and the air temperature was about 25F. Pretty rough conditions for a gravel grinder but the crew hung enormously tough. Drafting was important and I rode on both sides of the wind - pulling when I felt strong and hiding when I wanted a break.

We all opted for the "short"-course route which brought us back to House of Coates after 25 miles of gravel for me (35 miles for everyone else). There, we thawed and enjoyed some delicious burgers, like really insanely delicious. Wow. Kudos to everyone who braved the gnarly conditions!
Before we left the Cities, I got to meet up with my buddy Andrei who is injured (and also afraid of cold weather). It was super nice catching up with him and we ate my prize pumpkin pie from the Gobble Gallop! I'm not sure when or where we'll get the chance to team up again next season, but I really hope it happens! After our little tea-time chat, my Mom and I jumped back in the car and drove up to Duluth. It was a great day! Minnesota has such a great orienteering/adventure racing community and I'm stoked to be included when I'm in the area.

SATURDAY/SUNDAY
I had one last task to accomplish while in Duluth...working on a map of Hartley Park. MNOC has set up a permanent O-course on the eastern part of the park, but there is more good terrain on the west side. However, COGGS has been trail-building and the current map is outdated. So I volunteered to do some running with a Garmin to try and get a better handle on the existing trail locations. Saturday was still quite snowy and cold but it's easier to stay warm when running so I bounded out the door once the sun was out. I hit just about every trail in the area, but there were a bunch of un-mapped ones that confused me a little. About 2 hours in, my hands started to become badly chilled...the kind of cold that signals to your brain "stop being tough and do something now" so I made some ad hoc mittens out of my spare armwarmers and bailed for home. I wasn't terribly worried, my appendages have been exposed to lots of cold when I was outside at the barn all day, but I knew that inaction would make things even more unpleasant. I was using a GPS app to double-check my Garmin, so I had to operate the phone with my nose to stop its tracking. Talent!
Saturday night we took a family trip to Duluth's new Amsoil Arena to watch the UMD Bulldogs play some hockey. I've been a Bulldog Hockey fan since I was about 4 or 5, I even had the Maroon Loon wish me a happy birthday one year, and I still love going to games. We had dinner at the Duluth Curling Club before the game, a delicious walleye sandwich for me. There was a big Thanksgiving bonspiel going on so lots of activity on the ice. It was cool to watch, and very local...very few cities in the US even have curling, let alone a thriving club with league play just about every evening. My Dad plays on Wednesdays, in a league with 2 of my high school teachers. Yep, that's Duluth for ya.
Anyway, back to the game, it was a bummer as the 'Dogs played pretty badly and lost 5-1. But it was still fun time! 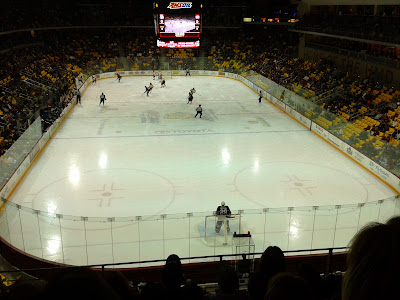 Sunday morning I took a quick run out to the barn to visit Flyer. I had grabbed an apple off of our backyard tree, but when I gave it to her, I realized it was still frozen. Ooops. She ate it anyway and I got to give her a good scratching. She's very fat and fuzzy, both good things for the winter! I also saw some mtb tracks at the trail system nearby. Any guesses what they're from?