Taking some inspiration from my coach I'm breaking this race report up into three sections, mostly because I don't feel like writing the whole thing all at once! So you are getting the swim today.
Race morning started out like almost every other morning in the last 12 weeks...with a large bowl of steel cut oats. I ate breakfast at the house I was sharing with 4 other athletes and 4 ironsherpas and we headed out in 2 cars for transition about 5am. I got dropped off and walked over to the start with my friend (and teammate and rival) Mike and we did the whole body marking/drop off special needs bags/place nutrition on bike thing with minimal fuss. I had my headphones in with sweet pre-race music and I was totally relaxed and ready. Like I said in the prologue, I knew I was fit and was just ready to start solving the problems of my first ironman-distance triathlon. I found Sonja and Katie by the flagpole and we spent some time chatting before it was time to put on wetsuits. Katie and I splashed around in the water before heading over to the swim start. There was a huge traffic jam of athletes and spectators so getting to the swim arch was pretty slow and nerve-wracking. Part of me was sure they wouldn't start while so many athletes were still on the sidewalk but part of me was sure they would start right. on. time. So Katie and I squished our way though lots of other neoprene-clad athletes (there is a reason no one goes to clubs in wetsuits) and finally made our way onto the beach. We chose a spot right about in the middle of everyone and just hung out. I was chatting with 2 dudes in front of us, asking what they thought their swim times would be (to see if we had "seeded" ourselves in a good spot) when BAM! THE CANON WENT OFF! The race was started and here I am chatting away with my goggles still on my forehead...whoops.
I splashed into the water with the rest of the athletes (I think 2700 or so started the race) and was hit by a fit of nervousness. This is very unusual for me so I just tried to swim it out. I was not getting hit, punched, kicked, or otherwise physically abused, it was just a lot of cold splashy water that made me unable to put my face in for at least 150m. I Tarzan-swam for at least 3 or 4 minutes trying to convince myself that sooner or later my face was going to have to go IN the water. And, eventually, it did, but not before being passed by A LOT of swimmers. I was never full-on panicking during this episode, I was just trying to absorb my nerves, keep my breathing even, and get to swimming. Once my stroke evened out, the first turn buoy came up surprisingly quickly. Soon I was swimming for shore and trying to find a somewhat decent line.
I was really happy to see the lake bottom and then finally stand up at the end of the first loop. A volunteer was shouting "thirty-seven minutes" which was exactly what I had planned for. I was pretty excited to get back in the water and finish the swim. Except, the weather had other plans for me. During the first loop, the wind had picked up quite a bit and now there was a lot of chop on the water, even more than my practice 2-mile swim a few weeks ago. This made finding the buoys really hard and I resorted to swimming in the middle of everyone, hoping that the pack would not lead me astray. The turn buoy took FOREVER to get to this time, and I was not exactly enjoying life. I couldn't wait to make the final turn for home and swim with a tailwind (or would that be tail-wave?). The last leg I was all over the place, zig-zagging from the outside of the crowd to the inside of the buoy line. Jeez. I was upset at myself for this poor navigation but refused to get angry...just tried to swim a better line to the next buoy, and the next buoy after that, etc. 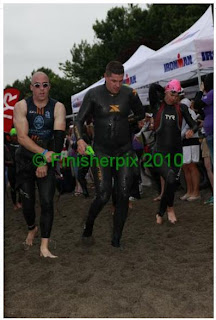 I exited the water in 1:17:13 with lap splits of 36:54 and 40:19. During training I had been targeting a 1:15-1:20 swim so I was pleased that it was over without any major disaster. I ran up to the crowd of wetsuit strippers and found a really attractive guy to take my wetsuit off, score! Then I picked up my gear bag and decided to transition outside of the tent since I didn't really need to change clothes. I was fast but deliberate in my transition, making sure everything (helmet, sunglasses, garmin, wristband, salt tabs, race belt, chammy cream, bike shoes) was put on properly so I wouldn't have to fuss with it later. Right as I was finishing, a volunteer appeared and offered to re-pack my bag for me...yes please! (This seemed to be a theme of the day...whenever I was wishing for a volunteer, they just appeared! Thanks!) More volunteers directed me to my bike, where I unracked it and took off for 112 miles! Pin It
Posted by Emily K at 3:35 PM