We join our hero (um, that would be ME) just seconds after she's collected her bike and crossed the mount line. Read the rest of my Ironman Coeur d'Alene experience by clicking here.

I crossed the mount line and continued jogging with my bike for another 20 meters or so. Since WTC doesn't allow athletes to leave shoes on their bike, I knew I would have to stop to get on the bike and didn't want to deal with the congestion that always happens in the first 5 meters after the mount line. So I crossed it, kept jogging, and found a quiet spot to get on, get clipped in, and start my 112 mile journey.
Right away I noticed my stomach and throat were slightly unhappy. I think the stress of the swim made my throat close up a little and maybe there was some lake water in my stomach. So I just rode easy for the first out-and-back along the lake, waiting patiently for my stomach to calm down so I could start the fun part of the day...eating! I knew that I had plenty of time to get all of my calories in so didn't rush things. I also chose not to wear arm warmers or a jacket or anything...just my normal tri race kit. I was a little chilly but not shivering so this was the right call for me. Before the race I had rubber-banded some chemical handwarmers to my aerobars so my hands were nice and warm. They stayed that way throughout the ride and I was super happy I didn't have to mess with gloves. Try it sometime!
As I came through town the second time (about 16 miles & 50 minutes into the ride) I finally felt good enough to start eating. This was perfect timing because soon after we left town on Hwy 95, we hit Mica Grade which is a long slow climb. My goal here was to keep HR in my decided range and to distract myself from the hundreds of people passing me, I munched on a Honey Stinger Waffle...mmmmm. A couple guys actually commented that I was being super smart by spinning easy up the hill. That made me proud. On the descent, I tried to similarly keep HR in my decided range so that meant staying aero and pedaling until I ran out of gears. My descending motto for the day was "brave and safe" and I was consistently able to catch a lot of people on these downhills. 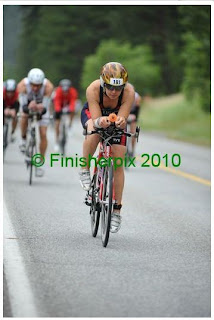 The rest of the first lap was awesome. I was eating happily, keeping HR in the range I wanted, and feeling great. I mixed it up with a lot of women here, they would pass me on the uphills/false flats and I would catch them on the descents. I noticed a few F25-29ers but not enough to get any sort of judgement on how I was doing within the AG. The sun came out from time to time and I just felt really lucky to be enjoying the beautiful day and scenery and exercise. As I was still outbound on Hwy 95, I suddenly feel a rider approaching very close on my left. Before I can react, I feel a huge SMACK on my butt. What the? But I soon find out it's just Mike, announcing that he's made up for my faster swim and is now in front in our bet. Hopefully he won't get too much farther in front of me. 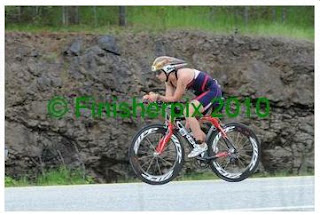 Towards the end of the first lap, I started to hurt. Specifically, my left knee started to hurt in a way that told me my left IT band was in trouble. Crap. I had not experienced this pain at all during training. What the heck was it doing, showing up in a big race like this? My mind drifted to a lot of "what ifs". What if the pain gets worse? What if I can't run? What if I can't climb Mica Grade a second time? What if I am doing permanent damage? Everything else in my body felt fine so I decided to try not to worry about the run until I actually got there. I told lied to myself that the pain wouldn't get worse, and that the change in motion of running would make it go away. 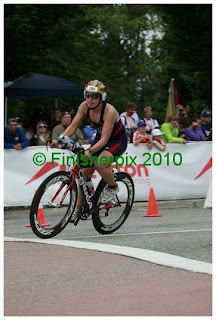 I finished the first 56-mile loop in about 3:04 and change and my HR was perfect. My muscles were perfect. My stomach was perfect. My knee was not perfect. This one hurty part of my body started to affect my mental state and I began to struggle on the lake section, miles 60-70. I passed bike special needs without visiting my bag since there wasn't really anything in there that would help me. There were a lot of dudes pulled over taking a pee break so I did the same except while rolling. I shoved a Snickers down the hatch in an effort to restore my happy mental state, and it worked for a little bit, but once I hit Hwy 95 for the second time I knew the entire outbound section would be a struggle against the increasing headwind, false flats, and mental blues. 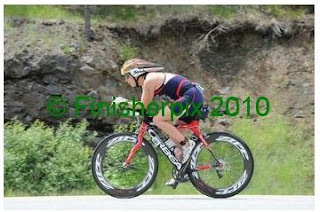 Unfortunately, I was right about miles 70-90. My knee hurt. I couldn't climb at full strength. My HR kept dropping and I was unable to consistently revive it, despite consuming more calories (with caffeine even) and trying to pick off riders ahead of me. At least twice (and maybe three times) I asked people next to me if the turnaround was close. Once I actually announced that "it's right up around that bend! I can see people turning around" when in fact we still had about 7 miles to go. For lack of better words, miles 70-90 sucked. I just kept hoping that I wasn't losing too much time and that the headwind would turn into an equally strong tailwind on the way home.

I FINALLY made the turnaround (mile 90) at about 5:10 into the ride and knew my chances for sub-6 were gone, but I could still hustle and pull out a bike split close to my race plan. And I tried to hustle, I really did, but my HR stayed peskily low. I finished eating everything I had with me (which was about 1900 calories) and grabbed a few gels from the last aid station in a desperate attempt to revive my HR. Fortunately, one of the gels I grabbed was my fav Roctane flavor Cherry Lime which gave me a boost until the backside of Mica Grade. I clawed my way up that thing, tried to haul on the downhill, and then focused on ignoring my knee pain for the rest of the trip into town. On the last no-passing zone, I got caught behind a paceline of a tri bike, a road bike, a mountain bike, another tri bike, and then me. I was pretty pissed off at this point because the mountain bike wasn't even racing, he was spectating! Even though he was keeping pace with the group, I was just angry at being held up this close to the finish. Once the no-passing zone ended, I jumped around these guys and booked it to the finish.

My final bike split was 6:13:08 and that moved me up to 7th place in the F25-29 age group (of course I had no idea of my placing during the race). I dismounted, leaving my shoes on the bike, and handed it off to a waiting volunteer. I ran into the change tent and 2 ladies helped me with putting on socks and running shoes, getting body glided, visor on, gels stuffed into pockets, and away I went. I knew immediately after leaving transition that overcoming the pain in my knee would be a major obstacle, but that's a story for the next post... Pin It
Posted by Emily K at 2:52 PM