I've been friends with Mike since the spring of 2010 when we raced a 24hr AR (my first!) as part of a 4-person coed team called Mid-Rivers Adventure. At first I was intimidated to have him on the team because I'd heard reports that he was uber-fit and fast. And I was...well...not so much. And usually in those types of situations, fit and fast guys can get impatient with their not-so-fit-and-fast teammates. But as it turns out, if Mike ever got impatient with us, he channeled it into helping the team move faster (carrying packs, running extra for punches, etc.) and we were able to successfully clear the course for my first taste of overnight racing.
Since the 2010 LBL Challenge, Mike and I have logged a few more adventure races, a few more triathlons, and a bunch more training hours together. Even though he's always a good deal faster than I am, I enjoy trying to stay on his wheel/heels when my schedule allows it. Plus, like any good training buddy, he makes funny, honest, and interesting conversation so I know there will never be a dull moment even if we are meeting for 3 hours on the Katy Trail. 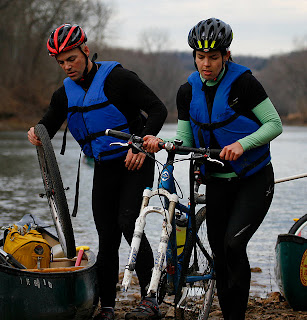 One of the highlights of my (short) racing career happened on a 2-person team with Mike, where we pulled off a 3rd place overall finish at the 2011 Bonk Hard Castlewood 8hr AR. We raced without our normal navigator, Bill, so we shared the map duties all day. I knew we had the fitness to compete with the top teams, but the great thing about AR is that fitness doesn't get you all the way to the finish line - teammwork does. But we stayed calm, in contact with the maps, and dedicated to a team finish...ON THE PODIUM!!!

So when Mike and I both found ourselves signed up for Ironman Coeur d'Alene, I knew it was going to be a fun race. And what's more fun than an Ironman? Betting on an Ironman! That's right, it's my first attempt at the 140.6 distance but I've got a fun wager to help motivate me through the dark times. The bet is a simple time bet, well except I negotiated a handicap of 0:60:00 (1 hour). So in order for me to "win", I have to finish 0:59:59 or less after Mike finishes. He seems to think this is extremely generous. I think it's extremely ambitious. Let's look at the numbers:

The one and only edge I carry into this race is my training. I've been laying down weeks and weeks of focused sessions. Mike's been training too, but not as consistently due to some major life changes (ahem...moving his family to DENVER this month). But he's got more fitness and more Ironman experience to draw from. It's really anyone's game at this point. And what's the prize? An all-inclusive steak dinner for the winner, paid for by the loser.
So who do you think will win? Either way, it's been fun trash-talking about this bet during training. Both of us are convinced the other will win handily. It makes for great motivation. And anyone who wants to buy Mike a few grasshoppers on Saturday night in Couer d'Alene, you have my 100% approval and encouragement! Pin It
Posted by Emily K at 1:42 PM