Note: check out my Kilimanjaro page to read about the entire trip.


We wake up one last time in a tent (if any Marshall grads are reading this...it was the first of many lasts). I feel very rested, but not ready at all to leave the mountain. But, the end of the trip has to come sometime and at least I have my very first peak bagged to show for it. I get almost all of my stuff packed up before Mchami comes to wake us up for a cooking demonstration by Peter. All throughout the trip, Peter has made us delicious food, but our favorite was a crepe-type thing that Mchami calls a "pancake" but sometimes it was savory. (Note: In my blog posts I have called it chapati, although after looking up real chapati recipes I'm not sure that's the right name either, but it seems to work for Tanzania.) Peter is in the kitchen tent (which is really just a regular dome tent), sitting on two packs in the middle with the propane burner in the vestibule. This has been the standard arrangement all trip, and usually Richard sits facing the tent to help him with food prep. He shows us the batter which is made with eggs, cooking oil, all-purpose flour, sugar, and vanilla. It's very thin. He puts some cooking oil into the pan and then pours the batter in a thin layer. He lets that cook for a minute or so, then deftly flips the pancake (rivaling any restaurant chef). A little more oil gets drizzled on top, and then he continues flipping every minute or so until the whole thing is cooked through. One pancake takes about 5 minutes. And usually we get at least 4 on a plate with a meal, sometimes 6. I feel incredibly spoiled.
After the demo, we go back to the tent and finish packing everything before our last mountain breakfast. We have pancakes/chapati, ugali porridge, hot drink (one last hot drink! cheers!), omelettes, and cucumber. And then, we hit the trail just like normal. The morning weather was cool at Mweka Camp but the temperature continues to increase as we descend and I'm peeling off layers frequently. We also start seeing the return of large trees. About 90 minutes into our hike, our porters pass us with their typical lightning speed. Godlisten latches on to their pace so he can arrive at Mweka Gate ahead of us and get our exit paperwork sorted. The mood is pretty jovial all around - tourists have (hopefully) hot showers waiting for them, and the guides/porters have tips to deposit. It feels like the last day of school.
About a kilometer later, the trail widens into an actual dirt/gravel road, the first I've seen in days. This really means we are getting to the end. Mareme explains that the road is only for park vehicles, and indeed, soon a park ambulance (white LandCruiser with a red cross painted on it) passes by going uphill, on its way to pick up a sick tourist. I chat with an older German man in one of my few conversations with other tourists. He says he and his wife have been planning this trip for over a year. He is amazed that Chris and I put the thing together in about a month. It's not that hard, really, with the Interwebz being what they are.
We also start to see non-climbing people along the road, which is another big shock. A few women are out with their kids, gathering something in the woods. We also pass a group of kids, probably 7-10 year olds (?) who are swinging on an overhanging vine and asking for chocolate handouts. Mareme says they are supposed to be gathering grass for their cows but instead are playing around. Swinging on a vine sounds like more fun to me and I almost ask if I can try it. But I don't.
Too soon, we are in sight of the trail's end. It widens again into a large dirt parking lot with several company vehicles parked. There are also lots of souvenir vendors selling bracelets, t-shirts, hats, patches, etc in USD, but we don't buy anything. We find Godlisten at the park office building where we are supposed to check out. I use the adjacent bathrooms and they are FLUSH squat toilets with a mirror over the sink. I haven't looked in a mirror for the whole trip and my face looks pretty tired, but not horrid. The park office gives Godlisten two summit certificates so he fills them out and presents them to us in front of the crew - they all clap! Then we pile into the Good Earth LandCruiser with Godlisten, Mareme, Peter, Richard, and Richard the driver (who picked us up at the airport) and another guy who I don't know. Richard the driver hands me and Chris box lunches, which are labeled "Chrisburger & Snacks". Awesome. I don't eat it yet because I'm not hungry. 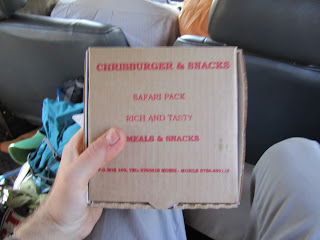 We drive to Moshi where Peter and Richard the porter are going to catch a different bus to their homes. Then, we start the process of trying to get Godlisten his tip. First, we go to a bank where I am supposed to use the ATM. Even though it's a real bank (with air conditioning and everything!) I do not want to use their ATM so I go to the counter instead and ask the teller to change the $100 USD bill. She can't do it, citing the date. Then I ask her to change my $100 USD Traveler's Cheque. She can't do that either. So I go back out to the car and tell everyone I'm out of luck. Godlisten suggests a Bureau de Change around the corner, so we try that out too. No dice (EVEN THOUGH the BdC has a sign outside stating an exchange rate for TCs, they refuse to change mine. No idea why). I'm a little lost and feeling horrible that we are causing such an issue. I finally suggest that we go back to Arusha, to the same BdC we used on the first day of the trip, since they changed TCs with ease. So we all pile back into the LandCruiser and hit the road for Arusha (where the hotel is).
The drive is pretty quiet for everyone. I'm still feeling stressed about the tipping situation, and I'm assuming everyone else is tired on top of that. We catch our last glimpse of Kilimanjaro as we cruise down the paved, 2-lane highway filled with random speed bumps. Godlisten still keeps up his guidely duties by pointing landmarks along the way, including the Coke bottle "gas station" at Sanya where we first met our whole crew. As we near Arusha, Godlisten and Richard decide to take us directly to the hotel instead of going into town to the Bureau de Change. Godlisten says he will accept my TC and get Good Earth to cash it for him. I'm still a little skeptical but relieved that the burden is off of me as we pull into the familiar gates of Planet Lodge. The staff greets us with washcloths and fruit juice - so nice! Just as it was weird seeing Godlisten and Mareme in their winter gears on summit night, it is weird seeing them in the hotel lobby, so far removed from the mountain trails. We unload all of our stuff, say too-short goodbyes, and watch the LandCruiser just, sorta, drive away. The trip is really almost over.
Back in civilization, we re-check into the hotel, collect the luggage they stored for us (nothing missing! excellent!), and write brief emails to our families saying we are alive and we made the summit. Then Chris claims first shower, hoping for the brief shot of hot water that I experienced upon first arriving at Planet Lodge.  While I wait, I eat my Chrisburger & Snacks box lunch on the floor of the hotel room, and Chris confirms that whatever hot water there once was is now gone. As I am sitting there, my eyes wander to a switch on the wall outside of the bathroom with a red light on the switchplate. It takes an instant and my mind puts everything together. Chris! I found the hot water! I shout and leap up to flip the switch. Sure enough, Chris confirms that the water has warmed up and I feel like I am starting to get Africa.
I shower next and while it feels nice, I think I would feel nicer if I was still on the mountain. Chris has commandeered my copy of Undaunted Courage again so I nap and then start unpacking my gears. The phone rings - it's David from Good Earth and he wants to meet with us in the lobby. So we go and have a chat, mostly confirming that our guides and crew were great, we ate lots of food, we tipped properly, etc. I hand in the tipping sheet we filled out earlier and explained Godlisten's situation, hoping David will help him sort it out. After David leaves, we hang out in the lobby, buying Cokes from the hotel bar and watching the Australian Open women's quarterfinals on TV. It is a crazy feeling - 48 hours ago we were prepping for the summit and now I'm watching the Belgian Kim Clijsters beat the Dane Caroline Wozniacki in an Australian tournament. And drinking a Coke. This is nuts.
We go back to the room for a little more packing and reading before it's dinnertime at the hotel. I order the same thing as our first night, a vegetable curry, and we watch Ghana play Botswana on TV (soccer). At least this seems a little more normal. After finishing dinner, I watch the remaining minutes of the match with a few of the hotel employees. We have a power outage but the signal gets restored successfully, and Ghana wins 1-0. I return to the room and finish up packing - tomorrow a driver will pick us up at 10a for some exploring before we have to go to the airport and fly home. This day has been long, somewhat stressful, and sad, and I am ready to sleep.