Like I did after the Castlewood 8hr AR, I wanted to post a few things that helped our team have a successful day in the woods at the Bonk Hard Chill 12hr AR.

NUTRITION
I brought 2L of water in my CamelBak and drank about 1.5L of it. Throughout the day I ate 1 package PB crackers (210cal), 1 Boost High Protein (230cal), 1 package Honey Stinger chews (160cal), and about 500 calories of CarboRocket Half-Evil with nuun (divided between 2 bottles on the bike). I had about 500 extra calories of food left over in my pack (gels and jerky) that I didn't eat. I was hungry towards the end of the race but we were so close to finishing that I just drank a little water and continued on. I wanted to have plenty of room in my stomach for the post-race BBQ!

GEAR
I wore my helmet for the entire first part of the race (trek, paddle, mystery, paddle, trek) before we even got on our bikes. My pack was full of gear and paddles, so there wasn't really any good place to put it besides my head. It conflicted with my headlamp on the first trek, but overall it worked out fine. So, let this be a lesson: just because you aren't on your bike, doesn't mean you can't wear your helmet! 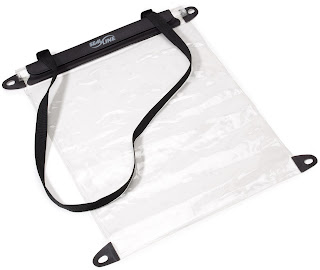 I used a new map case for this race, the SealLine Large HP Map Case (with the neck strap removed, I seriously dislike those things!). I really liked the thin, flexible plastic material. I also liked the large size. But, the tabs at the corners were difficult to manipulate with gloves on. And, the top seal (the velcro part) was not very flexible, so I could really only fold the map in one dimension. I got frustrated enough by it that I didn't use a map case at all for the final trekking leg. Thankfully, the mytopo maps are water-resistant so I didn't have to worry much. I am pretty sure I will be returning this and looking for a different map case. Any suggestions?

NAVIGATION
I am fairly certain was my first time using 1:24000 maps for navigation (usually I use 1:10000 or smaller orienteering maps). With the shorter legs, I didn't have much of a problem, but the first few longer legs really threw me off for keeping track of my distance traveled. Also, not all features are represented on a 1:24000 map, so major things like the Devil's Kitchen sinkhole did not show up on my map and caused a small panic attack.
Thankfully, we had taken the time in TA6 to transpose some of the trekking points onto another park map supplied by Bonk Hard (the blue one in the photo above). The park map had contour lines showing the large sinkhole and we used that to navigate through it to CP33. The park map was also helpful in getting from CP35 to CP37 because we had to run on a trail not shown on the 1:24000 map.

UPDATE!!! Now that I am looking at the maps on the computer screen, the Devil's Kitchen sinkhole does show up on the 1:24000 map, it is just partially obscured by the printed text and my CP labeling. So even though I did not see it during the race, it really is there. I am still glad we had the blue park map which is much more clear anyway. Pin It
Posted by Emily K at 8:55 PM