It seems a little anti-climactic to write a race report for a single-sport event. Hmm, let's see...I warmed up a little, I started, I ran hard on trails, and I finished. Boom. Done. No navigation, no transitions, simple. But, since I ran faster than I ever have before, and this race is a great seasonal bench-mark, I'll offer a few comments here.

First off, the Pere Marquette Endurance Trail Run has evolved into the unofficial trail running championship for the St. Louis metro area. The race directors don't advertise this way, no one wins anything special, but everyone knows that a win or top AG placing at Pere Marquette is a big deal. The profile is challenging and the trail is technical. Any weakness in the chinks of your fitness armor will be exposed in the first climb and then you are at the mercy of the course for the rest of its 7.5 miles.

Because 98% of the race is on trails, the race directors seed everyone into start waves to reduce congestion. This year, I was privileged enough to be seeded among the top female racers in Wave 1. Talk about pressure! My warm-up was a simple jog with BTB Megan (who was racing PMETR for the first time) and some skipping around the parking lot. I gave out some good-luck hugs to other racers and soon enough we were off. The first climb was surprising in that one of my fellow St. Louis Triathlon Club members and Wave 1 starter pulled off the trail and dropped from the race. I asked if she was okay as I passed, she just shook her head and said "not my day". Bummer!

The rest of the race was straightforward. I knew my HR was sky-high even though I had set Rover (my Garmin) to show only race time since I didn't want to attach a number to the pain. My usual tactic is to pace myself moderately up the hills and then race the downhills, grabbing any free speed when I can. The frozen solid trails made the downhills a little tougher on my legs this year, but I could tell I was at least holding my own. I was passed by another girl around mile 6 and couldn't go with her up the hill. I made a mental note to try and catch her on the final descent, but by the time we got to the top she was out of sight. With no-one to chase, it was hard to push that final drop and it cost me...another girl passed me in the final 400m. I sprinted to go with her too but my legs couldn't hold her pace for more than 10 seconds.

When I finished the race, I felt hungover. The sunlight was too bright for my mental state and I frantically searched for a shady tree to collapse under. About 3 minutes of the fetal position cured my headache and I knew I needed to get moving quickly, as my muscles were threatening to seize and I had another race the next day. I jogged over to the lodge to change clothes, grabbed Megan's jacket, and jogged back to the finish line where she had just crossed. We shared an easy cool-down and then hung around for the awards.

Thanks to Wendy for snapping this pic of me with my AG plaque! 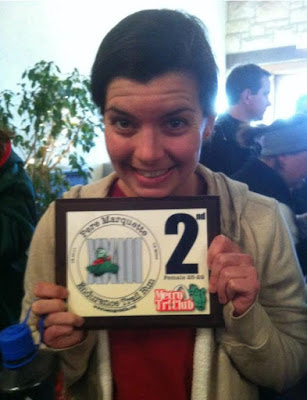 I placed the same in my AG as last year, but a different girl beat me. Of the women, I was 8th overall (down from 6th last year) and 91st out of the entire field (up from 99th last year). I think the excellent trail conditions were to my disadvantage since I seem to do better in terrible weather. Ah well, I'll just hope for more mud in 2012! Pin It
Posted by Emily K at 3:44 PM