One of the reasons I started this blog was so other beginning adventure racers would have a cool resource to help them prepare for their first few races. So here is a few quick notes about our race.

NUTRITION
I generally plan on bringing 200 calories per advertised hour of the race. So, an 8hr race gets 1600 calories and a 24hr race gets 4800 cals thrown in the pack, regardless of how fast my team hopes to finish. I include breakfast in this total. So, for Castlewood, I ate my usual breakfast of steel cut oats and coffee. I packed 2 bottles of CarboRocket Half-Evil (666 cal total) on the bike and left those at the drop-off. My pack had 1 Hammer apple-cinnamon gel (90 cal), 1 Ensure High-Protien (230 cal), 1 package Honey Stinger Chews (160 cal), and 1 package PB crackers (210 cal). I ended up not needing the HS Chews or the PB crackers.

For water we knew the pace would be furious and we didn't want to stop to refill anywhere. So I took a 100oz. bladder but only filled it with about 1.5L. I didn't drink all of that because I took on so much liquid on the bike (the CarboRocket bottles were at least 45oz. total and I drained them).

I'll write a longer post about AR nutrition someday but there is a place to start.


CLOTHING/GEAR
I basically brought everything that was on Bonk Hard's Gear List and not much else. From the bottom up, I wore wool socks, long tights (aka synthetic long underwear bottoms), tri shorts, sports bra, long sleeve synthetic shirt (aka synthetic long underwear top), and a short sleeve synthetic shirt. I used trail running shoes for the trekking sections and mountain biking shoes (that clip in with SPD cleats) for the biking and paddling. The fleece cap, rain jacket/pants, fleece top, and gloves were all in my pack. Like above, I'll do a longer post sometime about my basic AR gear but the MVP's for the 8hr were my running tow and Mike's bike tow. Here's a shot of a teammate's bike tow from my first AR: 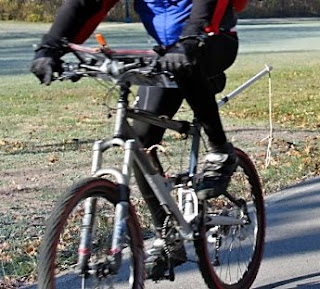 It's a PVC contraption that fits around the seatpost and has some bungee cord threaded through it. At the end of the bungee cord is a loop. The slower rider grabs the loop and hangs on while the faster rider pulls. It's a great way to share energy in a team situation. I think it also helps the slower rider with a mental reminder to keep pedaling. Only Mike had one at Castlewood since we didn't expect the race to be long enough to tire him out (and it didn't).

My running tow is even simpler, it's a piece of bungee with a carabiner on each end. One end clips to the pack of the faster runner, and the other end clips to the slower runners hip-belt. Here's a pic of the disconnected tow from the finish line, the orange carabiner (that's on my chest strap) is the part that clipped to Mike's pack. The black carabiner (hard to see, sorry) is on my hip belt. 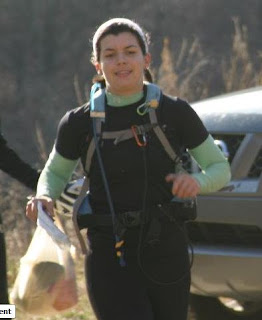 MAP PREPARATION
Like I described in the race report, Mike and I took the maps to our usual-but-injured navigator Bill's house on Friday night to plan our strategy. Bill helped us with route choice and then we took an orange highlighter and marked EXACTLY the route we wanted to take through the woods and roads. When we received extra trekking points to plot at the end of the race, we did the same thing even though it took a bit of extra time in the TA. Here's an example of our route choice from 28 to 26: 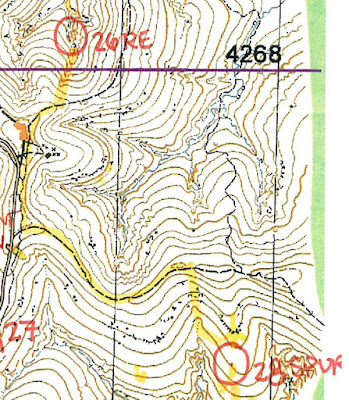 You can see that instead of running "as the crow flies" or "following a direct bearing", we chose to ascend the reentrant to the west of 28, catch a ridgetop trail going west-ish and then turning north, and then descending down the east side of the spur to 26. This made our navigation really easy when we were out in the woods, we just looked for the big features and executed our plan. More experienced navigators can do this all in their head, but for our level it was very helpful to have it on paper. (By the way, I think our CP28 was misplotted slightly since the flag was hung in that rock outcropping a little higher up the spur...but we managed to find it anyway.)


Those are three things I think beginning racers could think about for their next adventure race. There are about a million more, of course, and I hope to have lots more posts in the future about starting off in this sport. I know before my first race I google-searched the crap out of "adventure race reports" and had a hard time finding some that would help me know what to expect. Anyone have any questions? I'd be happy to answer in the comments :) Pin It
Posted by Emily K at 11:30 PM