It's not very often that I buy anything brand new, let alone a bike. Of the seven bike purchases I've made in my post-college lifetime, exactly one of them has been a brand new model (my first one, the LeMond road bike). The rest have been used to varying degrees before I had the pleasure of owning them.
During the 2012 season, when I actually started training on my mountain bike, I realized that I wanted a nicer one. The Cobia I was riding was a great bike for a beginner, and I was starting to feel like I was no longer a beginner. I wanted MOAR SPEED. So I mulled over the several choices out there, both in complete bikes and custom builds. I bent the ear of every single mountain biker I rode with. For a while you couldn't even have a conversation with me without getting asked "SRAM or Shimano? Reba or Sid? Carbon or aluminum? X9? XT? PF or BB? Trigger or twist? 2x10 or 3x9? WTAH or PBR?" 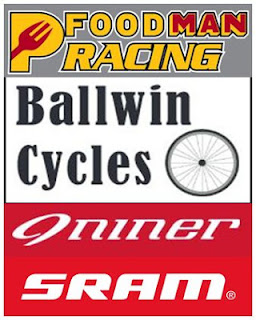 It helped that Pfoodman Racing got accepted into both Niner's and SRAM's Grassroots Programs through our sponsor shop Ballwin Cycles, allowing us discounted pricing on frames and components from these two top-notch companies. I have been obsessed with Niners ever since my first outing at Burnin in 2010. It seemed like these gorgeous bikes were everywhere and I wanted one. BADLY. But with my skillset at the time I couldn't justify shelling out big $$ for a bike when I wasn't even able to make it around CBL without a flat. So I waited, and rode, and rode, and rode some more, and when I got the Grassroots news I knew it was time.

Mark, Cody, and all the guys at Ballwin helped me pick out components that fit my racing goals and budget. We settled on the following build:

And we'd stick my current wheelset on there, a set of Stan's Crest rims and Chris King hubs that I'd been riding for about a year (also built by Ballwin). As Mark was placing the order, he somehow found an Air9 frame (maybe a demo?) that Niner was willing to part with for a price close to the EMD. I had wanted at Air9 frame in the first place but scrapped it in favor of fitting the carbon components into my budget. When he told me the news, I was SOOOO STOKED! I don't know what strings Mark pulled to make that happen, but it just shows his commitment to happy customers. I am happy. So without further yammering, here is my new bike - the SegSlayer, name inspired by an Attackpoint comment by my friend Tom.
Pin It
Posted by Emily K at 11:15 AM