With the BT Epic over and done with, my 2012 season is basically over. I'm treating November and December like a J-Term of sorts...time to do some fitness/training experiments. Even though I didn't realize it until halfway through the month, October was my off-season. I had 2 big adventure races in September, so I didn't really train much this month, instead choosing to race (and recover from) 2 big mountain bike races. I may not have derived a lot of fitness from them, but my technical mtb skills improved SUBSTANTIALLY (although not hard to do since I wasn't that great to begin with) and I learned a lot about what motivates me as an athlete - the stoke. And thank goodness the promoters of the BT Epic (Scott and Jake) shared some with me because I'm totally fired up to go back to their race in 2013.
A "normal" month for me is usually about 70 hours of training and racing combined (and yes I did calculate this based on my AttackPoint log). So my 31 hours of activity in October is a huge drop-off (especially considering 15 of those were racing hours). But, I needed it the break I had a weird knee niggle from CPT Nats that needed resting. I had a number of days when I just felt like going home and sleeping after work. So that's what I did. I took a zero. 22 of them, in fact.
So after my "month of rest", where do I stand? What's motivating me to get back in the 70 hr/mon groove? I have a couple things coming up. The first is at attempt at 30 runs in 30 days for November. I can't remember where I first heard of this idea but it is perfect for what I need right now...increased frequency at low intensity. All of these runs I am intending to do (provided my knee holds up) at or below MAF heartrate. 30 minutes is the minimum to "count". I'll do a couple straight-up MAF tests to check progress but really I'm just interested in starting to build my base for 2013. Interested in joining me? That's simple, I'll be running (EASY!!) every day in November. Get in touch!
I've also started working with a nutrition coach. This is something I've wanted to do for a while, but Ironman sorta sucked any spare change I had into its trademarked M-dot logo. Now I'm back in the black and working with Christine aka The Holistic Guru to optimize what I eat. I gained a few pounds this summer, and how does that make me feel? Well, fat, for one thing, but not in a panicky way, more of in a laughing "wow look how quickly I got soft" way. (love ya Katie!!) Guru and I have chatted a bit already and I think we both agree I have a lot of the puzzle pieces in my head and in my fridge, but I have to learn better ways to put them all together. One of the first comments from her after chatting about my daily diet was "are you vegetarian??". The answer is no, but I was definitely lacking in protein consumption. So we're on a mission to fix that, and also get me lean and mean for 2013!
Finally, December is gonna be fun. The first weekend I will race in my 4th straight Bonk Hard Castlewood 8hr AR. This event in 2009 was my first adventure race of all time, and it got me hooked. The following two years, I was on teams motivated to win, which was a blast. This year, I'm following in the footsteps of ROCK Racing and captaining an all-newbie team. I've recruited three people from Pfoodman Racing (my mountain bike team) to race as "The Pfast and the Pfurious" on the (p)first day of December. I'm stoked to introduce more people to the wild wonderful world of AR. 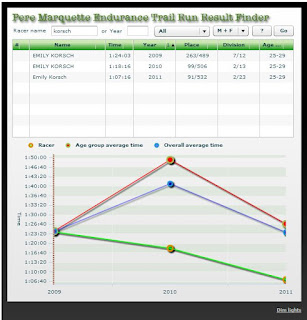 The weekend following will be full of company parties and the unofficial St. Louis championship of trail running - Pere Marquette Endurance Trail Run. I'm back for the 4th time and excited to see if I can finally win my age group after placing 2nd the past 2 years. No wimps, no whiners!! Pin It
Posted by Emily K at 8:35 PM