Note: click on the "kilimanjaro" label to read about the entire trip. 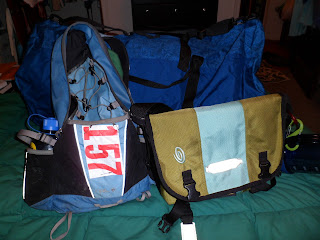 After finishing most of the packing the night before, I meet Megan at our favorite coffee shop so we can caravan to my work (to drop off my car in the gated parking lot) and then to the airport (so I can, uh, get on a plane). I fly Southwest to Chicago-Midway and then into New York-LaGuardia. I land in New York and then realize I don't really have any plans or instructions to get to Chris' apartment. That's a little uncharacteristic, but nothing a cell phone can't solve. I call Chris* and get the skinny about taking the M60 bus to the E train...no problem. Except I am lugging a humongous duffel which threatens to permanently entangle me in the turnstiles. I'm sure I made a pretty comical sight at Penn Station but if there's one thing I love about New York, it's that you can look as ridiculous as you want and there's always someone weirder. So no worries.

I call Chris as I pop out on 14th Street and we meet on the sidewalk. It's an awkward hug since I have so much luggage but Chris helps out and takes my backpacks as we go to his parents' apartment. In all the years I've known Chris, I've never properly met his parents so it's great to finally meet them. The apartment is gorgeous and we have a delicious dinner of steak salad. Yum. I feel the need to pack in raw veggies since I won't be eating them in Tanzania. We do a little bit of gear rearranging, tip organizing, and football watching before bed. 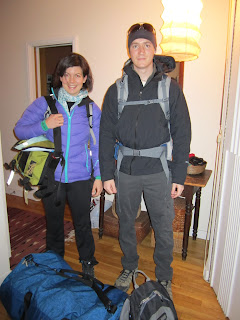 We make scrambled eggs and toast for breakfast before hitting the streets of Greenwich Village for some last-minute shopping. I need a spare camera battery, Chris needs some drink mix, and we both need cash. Once we get back to the apartment, we pack everything up and take some "before" photos, which remind me of my parents taking "first-day-of-school" pictures of me as a kid. 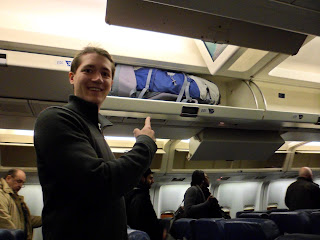 Then we take a cab to Penn Station, a NJ Transit train to Newark Airport, and an AirTrain to the terminal. I check my duffel and Chris argues vehemently to carry-on his 65L backpack. Somehow he convinces the agent it will fit in the overhead. We find our gate and I eat another salad while Chris charges his phone and we both watch more football. Gotta embrace our last minutes of America! We board a Delta plane for the overnight flight to Amsterdam and Chris' backpack does indeed fit in the overhead - victory! 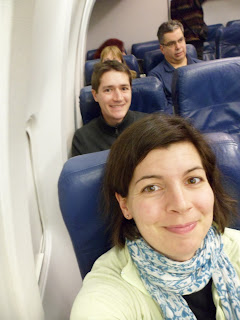 The flight is not as bad as I thought it would be. Even though we're in plain old economy, beer and wine are FREE and we are fed actual meals. I have ordered vegetarian meals for all of our flights because airplane meat weirds me out. Except I forgot that vegetarian to the majority of people means "pasta with cheese", two food groups that I'm not especially fond of. So dinner is a cheese-filled pasta with pesto cream sauce. With some insanely sweet white wine. 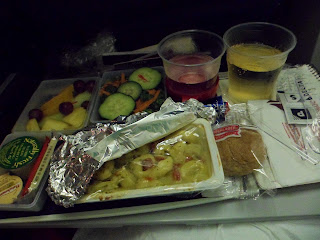 I go to sleep after dinner and snooze over most of the Atlantic. I wake up over London and we are fed again - muffin, a banana, and orange juice. We land in Amsterdam just a bit after 7am, and the sun isn't even up! Those poor Amsterdamians! We just hang out in the airport as the sun rises, walking around a little bit, until it is time to board the flight for Kilimanjaro. This time it's a KLM plane and it has a name - Audrey Hepburn. Classic. Before we board we have to go through security AGAIN, at the gate. I guess Schipol Airport rolls this way? The flight attendants again cast their scorn on Chris' large bag but they allow him to carry it on when they see my small bags. I guess we equal each other out? 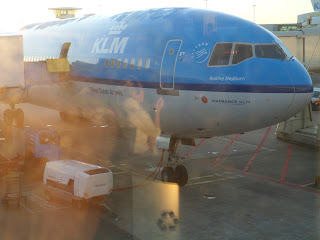 The flight to Kili is LONG. Thank goodness for the excellent KLM hospitality - every seat in economy has a personal video screen with about 50 free movies to choose from. I watch Footloose, Crazy, Stupid, Love, and I Don't Know How She Does It. Please don't judge. Lunch is a delicious veggie curry! Awesome! I eat it as we go over the Alps! Awesomer! I try to nap a little as the sun sets because we have a few more hours to go. We finally land at JRO about 8.40p. It's such a tiny airport that after the MD-11 plane lands, it has to make a 3-point turn at the end of the runway to return to the terminal. There is no jetbridge - we just walk down some steps and across the tarmac in the general direction of this one door. There might be 1 or 2 airline crew supervising this - we are definitely not in America! It's dark out but warm and the terminal building has no air conditioning. Most of the passengers need to get their visa so we stand in a glomulous line for a while until it's our turn. The agent takes a quick glance at my entry paperwork, a slightly less-quick glance at my $100 USD, and then stamps my passport. BOOM. I'm in Tanzania. 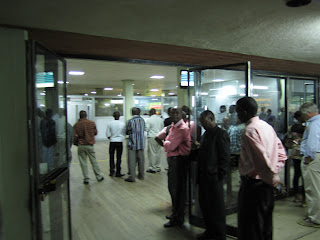 Now we have reached the first of two rather large measures of the trip's success - has my checked bag made it to Kilimanjaro in one piece?. We go into the baggage claim area where there are many pieces of luggage circulating on a belt. I don't see my bag. I start to have visions of hiking in the same pair of underwear all week. And then, lo! A blue duffel appears! With the TSA locks intact! Rejoice! I will have clean clothes after all. I hoist the bag up and carry it into the reception area. Now it's the second rather large measure of the trip's success - do we have a driver waiting for us? There are many many people with many many name cards. I don't see anything familiar. Then, Chris spots a card with "Emily Korsch x2" on it and we meet our first Good Earth employee in the flesh. His name is Richard and he will be driving us plus 3 others to the hotel tonight. The others haven't made it through the visa line yet so we are instructed to wait outside with our bags. I take the time to use the toilet which looks like this: 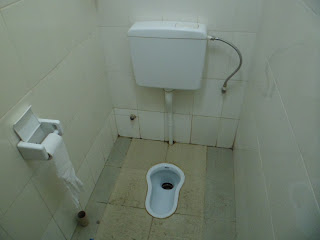 Once the other tourists have been collected, Richard loads all of our stuff into a Good Earth LandCruiser and we are off to the Planet Lodge in Arusha. The drive takes about 45 minutes and although it's dark, I see several people out and about - walking down the road, congregating outside houses or bars, etc. I pinch myself several times on this drive. I am in AFRICA. 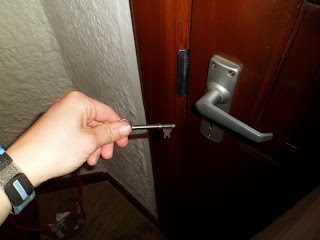 We arrive at the hotel which is clearly a tourist hotel - it's gated and way fancier than any of the surrounding properties. The hotel staff greet us in the lobby with small glasses of juice and warm washcloths. Both are much appreciated as we sign in and are directed to our room, which features an amazing entry system (see photo). We are offered dinner but both Chris and I are too tired to be hungry, so we basically dump our bags in the room and go to sleep right away.
Three days, 20.5 hours of flying, and almost 9,000 miles traveled have landed me in Tanzania, ready to start a wonderful adventure. I am giddy as I fall asleep, but so tired that it doesn't take very long.

--------------------------
*I know what people are thinking because some have asked me in person already - NO, Chris and I are not dating. We have been friends since sophomore year in college (same major). He is one of my closest friends and I hope that doesn't ever change. I happen to be (chronically) single but Chris has a great girlfriend (hi Casey!). So, stop your whispering already!
Pin It
Posted by Emily K at 8:21 PM