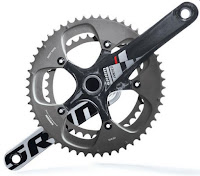 I have a confession. I have been coveting some triathlon-related gear. The biggest of which is a SRAM RED crankset, 165mm, 10 speed, GXP, 53-39T. Anyone have a spare one of those layin around? I'll trade you for the exact same thing except with 172.5mm cranks. Tweet me if you do. 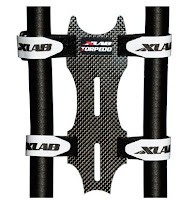 Another thing I have been coveting is much smaller: the Torpedo Water Bottle Mount made by XLab. It's a little piece of carbon fiber paneling with some holes drilled into it, designed to mount a water bottle cage horizontally between the aerobar extensions. Supposedly this mounting scheme causes way less drag than a traditional aero bottle. For my 2011 triathlons, I tried to make my own set-up with electrical tape, and it worked pretty well for my two half-iron races. Then, at ITU LC Worlds, I used the same setup and lost at least 2 and maybe 3 bottles (can't remember exactly) over the 120k bike course. This will not do for 2012, but when I went to purchase this little piece of carbon with velcro straps, I did a double-take. $50?? Really?


The engineering mind in me got to thinking. Surely I could make my own version of the Torpedo mount for just the cost of some lightweight, stiff material and my own time. I recruited my brother to help me since he has access to scrap carbon and knowledge about machining things. His girlfriend found me a piece of scrap carbon, and on the day after Christmas we put our heads together and got to work.
We decided to make a quick sketch of the part in CAD using UniGraphics. Since it was my project, my brother made me do all of the computer work. I had never used UniGraphics but he did lots of hand-holding and pretty soon we had progressed from just some lines and dimensions to a full-blown extruded model. I fiddled with the front end a bit, but finally we both decided that we liked the look of an all-concave-curve piece which you can see in the last frame below:
The whole design process took at least 2 hours. Most of that time was me learning how to operate the software. We didn't make many calculations, most of it was me sketching on paper how I thought it should look, then comparing it to XLab's photos, then tweaking it in the model. That was the end of Day 1. The next day, we went over to our grandparent's house for dinner (not the same instance as this) and also to use my grandpa's workshop. It's small but is very well stocked and clean. There, we printed a scale template that we could directly transfer onto the carbon panel. I cut out the template with an knife, then traced it onto the carbon. We had covered the panel with painter's tape to both protect the surface and make the tracing visible.
Next, we used a drill to drill out the ends of each slot. We used a larger bit for the 2 middle slots, and a smaller one for the 4 smaller slots, but I forget the exact sizes. Once the holes were done, we used a Dremel tool to cut the straight edges of each slot, so 12 cuts in all. I did the drilling and Dremel work. My brother made the exterior cuts with a bandsaw.
Finally, this thing started to look like an actual piece of racing equipment! 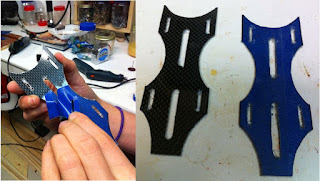 When I got back to St. Louis (and let several months go by), it was time to sand these suckers into submission. Mwahahahaha. First I started with 100-grit paper to get all the big chunks off. I used a chopstick to help force the paper into the small slots. Then did the same thing with 220-grit and 400-grit, in that order.
Then, it was time to put on a finishing coat. Although, I gotta admit, I was too dang excited to try this out so I mounted the sanded-but-not-coated piece onto my bike for an easy Saturday spin. I had to add a little bit of bar tape (lucky I had extra laying around) under the lower velcro straps so they would be more stable. And I had to steal a decidedly un-fast-looking plastic bottle cage from my mountain bike (complete with residual dirt). But I confirmed that the dimensions all line up, the velcro holds pretty well, and the piece will not break under training stress.
After that first ride, I purchased a carbon bottle cage for aesthetic purposes (it's my bike that's vain, not me) and then decided to put a different final coat on each piece. For one piece, I used a 5min clear epoxy. On the other, I used a spray-on clear coat. I discovered my epoxy-ing skills are severely lacking; I ended up wasting quite a bit and the finished product still looks a little goopy and uneven. But it is very shiny and feels durable. The spray clear coat was ridiculously easy to apply but the finish is thinner and looks like it might wear off more quickly.

I proved myself right with this project, that the X-Lab Torpedo mount really is just a piece of carbon with some holes cut into it. And it can be made at home. But it took a significant amount of time, way more than $50 worth, to create this thing. It took design time on the computer, fab time in my grandpa's shop and in my apartment, and shopping time in a hardware store for the screws/washers/nuts/velcro/epoxy/clear coat. Granted, I had a learning curve on the design software and epoxy finishing, but it still was a multi-step project that consumed several hours. So if you don't have access to free scrap carbon, or a bandsaw, you are probably better off just buying one from your local LBS. And then you won't have a goopy epoxy job to deal with!
Pin It
Posted by Emily K at 8:18 AM