OK, David may have had his time in the spotlight with the official race report, but I want to talk too! So here are some details about our 10 hours in the woods at the 2013 Bonk Hard Perfect 10 Rogaine.
Route Planning
Before we even got our maps, David and I had an idea of what we could accomplish. We estimated we could cover about 50k in the 10 hour time limit, so when we got the maps the first thing we did was wheel out a few different sweep routes to see what they were measuring. They were roughly 50k, so we knew that we should spend our pre-race time planning a sweep route, instead of planning a high-score route.

Then, we looked at the controls as they were scattered on the maps, and where the 100-pointers were. We mentally divided the race into three sections: the Western Peninsula, the Northern Blob, and the Eastern Airport Loop. Each section had its own characteristics, and we chose our direction (clockwise vs. counterclockwise) based on those characteristics. Basically, we chose to do the Western Peninsula first, because it had a ton of road running and we wanted to do that with "fresh" legs (as fresh as they can be after 3 weekends of racing). Then the Eastern Airport Loop had some better skip options for late in the race because the controls were more N/S scattered (the Western Peninsula were more E/W scattered so you had to really commit to getting everything). 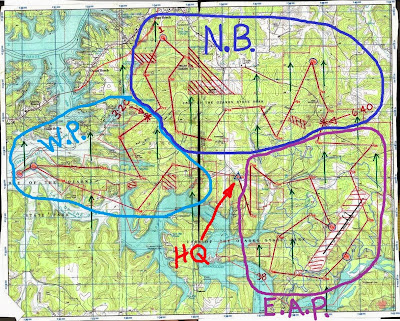 Once we got the final order, we measured it again and marked off approximately every 10 miles (thirds) with a time check. That way, we could make sure we were staying on schedule to get back to HQ before the deadline. That strategy worked okay, but in the future I would divide the race into quarters or even fifths. Our pace drastically slowed down in the last half of the race and we may have been better able to control/mitigate that slow-down if we had more than one time check.

The key to route planning is a large dose of humility. I experienced this first when we were route planning for the 2013 LBL Challenge. David and Jeff are not afraid to plan for ridiculously slow paces in the final stages of a race. For example: 5k per hour, our overall planning pace, equates to roughly 19-minute miles. 19-MINUTE MILES!!! We are fit athletes here!!! It is almost insulting to plan for that pace. But when you factor in off-trail obstacles, plus all of the micro-route choices we take in the woods, plus time to stay in the map, 5k an hour is really quite reasonable. And that pace gets slower when you talk about the end stages of a 10- or 18-hour race. So do not even try to equate your orienteering/rogaining pace with your normal road-running pace. It's just not comparable.

Clothing and Gear
I felt like I really nailed my clothing and gear choices for this race, and it's probably because we've been racing so much that I'm pretty dialed with what my body needs. Because it was going to be a cool race (highs in the low 60s) I knew I could double-up my pants for thorn protection and not overheat. So on bottom I wore tight Salomon running shorts, long CW-X tights (not chosen for their compression characteristics, but rather they are thicker than most running tights), and long North Face trekking pants. This is a bomb-proof anti-thorn set-up. I could crash through most briars and be largely unaffected. I didn't really need the Salomon shorts, in fact they kind of gave me a wedgie for the entire race, but I was worried about chafing in tights alone, so the shorts served their purpose.
On my feet I wore my trusty Brooks Cascadia shoes (with speed-laces) with Swiftwick socks. A match made in heaven! I used Hydropel on my feet before the race and they stayed quite happy they entire time. I've used this set-up for almost every race this year and it's served me very, very well. Too bad that Hydropel isn't being sold anymore! What are they thinking!

On top I had my Alpine Shop jersey, Swiftwick arm warmers, full-finger gloves, and a hat. In the middle of the race I took my hat off and replaced it with a buff for hair control. I also pulled down my arm warmers but never bothered to take them completely off. I used a Silva Jet thumb compass too. If you haven't tried a thumb compass...do it. They are awesome. Hard to buy in the US, but completely worth it to wait for international shipping. Normally orienteers use their non-dominant hand for their compass so they can punch with their dominant hand. Well, I never got the memo, so I am backwards and use a right-handed compass. The Jet comes in both right- and left-handed versions. We did not use any map cases - the mytopo maps are waterproof and cases just add bulk and weight.
For a pack I used a 10L Camp vest. I got this pack last year and I absolutely LOVE it for short races. I used a 2L bladder, filled completely to start the race. The Camp vest has 4 huge and 2 small pockets in the front. The huge pockets are perfect for keeping snacks accessible and trash organized. I kept the passport in the small velcro pocket (it was also attached to a bungee necklace). BuzzBites, Vitamin-I, and e-caps went in the small zipper pocket. I would also stuff my map into one of the huge pockets every time I went to punch. I just can't emphasize enough how much I like the front pockets. Bliss!

One more note, this isn't trying to be a commercial for anything (well, except Alpine Shop because they are awesome, go visit their stores! or you can buy stuff from their website!). I just like to list my specific gear from time to time in case people are wondering. When I first got into adventure racing/orienteering I was clueless about what to wear so I'm offering some suggestions here.

Bonk Hard
After racing USARA and CPT Nationals, each hosted by different adventure racing organizations, it was such a treat to come "home" to a Bonk Hard race. Gary and Ellen put on top-notch events and really care about their racers. Ellen is just about the most organized person I have ever seen and even though David and I were late entries, she had everything ready for us at check-in. Gary set a great course and every control was hung where it was shown on the map. The map was also surprisingly good, too, even the vegetation boundaries were accurate! And, it was wonderful to see our friends from the Midwestern AR and orienteering scene, and pig out on the awesome finish line food (seriously...cheesy hashbrowns IN chili! mindblowing!). We are so lucky to be part of this incredible community of athletes. And here's some more great news...rumor has it that Cedar Cross will be returning in 2014! All hail Bob Jenkins (and start the bribes for the romantic weekend at Tan-Tar-A that he won)!

Okay that's it from me! As always if you have questions please leave a comment and I will respond! Happy rogaining!